Background/Objective: Protein-protein interactions are essentials for most cellular processes and thus, unveiling how proteins interact with is a crucial question that can be better understood by recognizing which residues participate in the interaction. Although many computational approaches have been proposed to predict interface residues, their feature perspective and model learning ability are not enough to achieve ideal results. So, our objective is to improve the predictive performance under considering feature perspective and new learning algorithm.

Method: In this study, we proposed an ensemble deep convolutional neural network, which explores the context and positional context of consecutive residues within a protein sub-sequence. Specifically, unlike the feature view of previous methods, ConvsPPIS uses evolutionary, physicochemical, and structural protein characteristics to construct their own feature graph respectively. After that, three independent deep convolutional neural networks are trained on each type of feature graph for learning the underlying pattern in sub-sequence. Lastly, we integrated those three deep networks into an ensemble predictor with leveraging complementary information of those features to predict potential interface residues.

Results: Some comparative experiments have conducted through 10-fold cross-validation. The results indicated that ConvsPPIS achieved superior performance on DBv5-Sel dataset with an accuracy of 88%. Additional experiments on CAPRI-Alone dataset demonstrated ConvsPPIS has also better prediction performance.

Conclusion: The ConvsPPIS method provided a new perspective to capture protein feature expression for identifying protein-protein interaction sites. The results proved the superiority of this method. 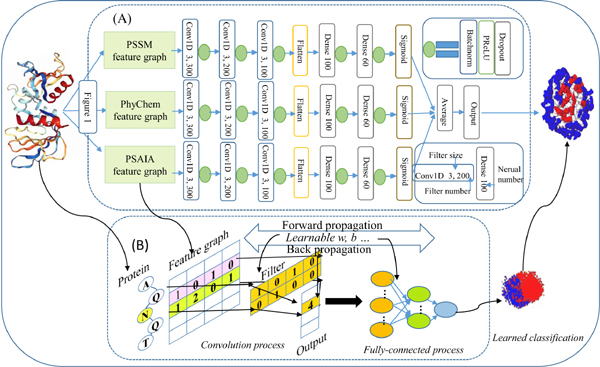