Background: Heart failure (HF) is a leading cause of mortality rate worldwide, but studied less for its underlying biomolecular mechanisms. With the advances in gene sequence analysis, many non-coding RNAs, especially from long non-coding RNA (lncRNA) genre are found to be involved in regulating HF conditions. Recent studies are based on competing endogenous RNA (ceRNA) theory in which lncRNA-miRNA-mRNA compounds control many disease conditions.

Method: In this paper, we present a topic model based network cluster analysis to identify the role of lncRNAs in HF. The network is constructed based on the differentially expressed long noncoding RNAs (lncRNAs), micro RNAs (miRNAs), and messenger RNAs (mRNAs) of heart failure patients and control samples from the gene expression omnibus (GEO) database. Further, we extend the primary ceRNA network by adding pathways as additional nodes. Deep belief network based feature learning is used to extract the features from the network automatically.

Results: We obtained two clusters where each cluster was a mixture of lncRNAs, mRNAs, miRNAs and pathways. The analysis included the identification of key lncRNAs, enriched pathways, and gene ontology terms from each cluster. Based on the shreds of evidence from literature, one of the clusters obtained was identified to be an essential functional module in HF mechanism. The potential of lncRNA as a diagnostic biomarker in HF was also analysed.

Conclusion: The proposed work gives more insight on involvement of lncRNAs in the HF mechanism. The cluster analysis also brought some significant lncRNA-pathway associations into notice, which are supported by recent literature. The identification of lncRNA biomarkers can help in the early detection of HF and discover the missing links in disease pathology. 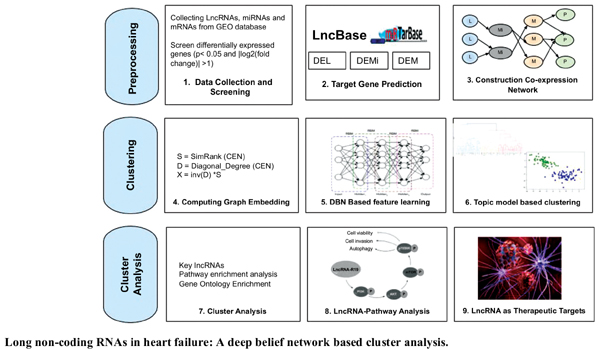