Background: The ovarian follicle is an essential component of the reproductive process. It plays an important role in controlling the estrous cycle, determining estrous behaviour, ensuring oocyte competency and subsequent embryo survival rate, and determining both post ovulation corpus luteum function and progesterone synthesis. Traditionally, gene expression studies in the field of follicular development focus on the study of expression of candidate genes of interest. With the development of next-generation sequencing technologies, transcriptome profiling has become a powerful approach for identification of genes globally expressed in various tissues including ovarian follicles.

Method: Ovaries were removed, greatest (ODF1) and second greatest (ODF2) diameter follicles were isolated, and GCs were isolated from the two types of follicles (n=4). RNA samples of follicles were pooled within ODF1 and ODF2. The two cDNA libraries were sequenced, and mapped to the bovine RefSeq database. Gene ontology (GO) functional enrichment analysis was subjected and differentially expressed genes were analysed using visualization plug BiNGO of Cytoscape 3.0.0 software. KEGG pathways were performed and all the pathways and protein equivalent convert information of UniProt database of cattle. Twelve genes were selected randomly to verify their expression by QRT-PCR technology.

Results: A total of 43,708,132 and 43,826,914 clean reads were obtained for ODF1 and ODF2, respectively. After being mapped to the bovine RefSeq database, a total of 15,519 genes were expressed (cut-off RPKM>0.5), of which 761 were highly expressed (cut-off RPKM>100) in both types of follicles. GO functional classification of these highly expressed genes revealed that many of them are involved in metabolic processes, multicellular organismal processes, and binding. Furthermore, 831 genes were identified as differentially expressed in ODF1 versus ODF2, in which 384 genes were up-regulated, and 447 genes were down-regulated. KEGG pathway analysis revealed eight differentially expressed genes in ODF1 vs. ODF2, QRT-PCR results showed that 9 of the 12 selected genes mRNA amounts were significantly greater in ODF1 than that ODF2 (P<0.05 or 0.01), which was consistent with the deep sequencing data. 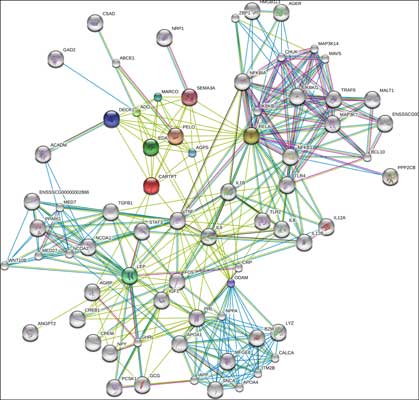