Background: Drought is one of the most damaging and widespread abiotic stresses that can severely limit the rice production. MicroRNAs (miRNAs) act as a promising tool for improving the drought tolerance of rice and have become a hot spot in recent years.

Objective: In order to further extend the understanding of miRNAs, the functions of miRNAs in rice under drought stress are analyzed by bioinformatics.

Methods: In this study, we integrated miRNAs and genes transcriptome data of rice under the drought stress. Some bioinformatics methods were used to reveal the functions of miRNAs in rice under drought stress. These methods included target genes identification, differentially expressed miRNAs screening, enrichment analysis of DEGs, network constructions for miRNA-target and target-target proteins interaction.

Results: (1) A total of 229 miRNAs with differential expression in rice under the drought stress, corresponding to 73 rice miRNAs families, were identified. (2) 1035 differentially expressed genes (DEGs) were identified, which included 357 up-regulated genes, 542 down-regulated genes and 136 up/down-regulated genes. (3) The network of regulatory relationships between 73 rice miRNAs families and 1035 DEGs was constructed. (4) 25 UP_KEYWORDS terms of DEGs, 125 GO terms and 7 pathways were obtained. (5) The protein-protein interaction network of 1035 DEGs was constructed. 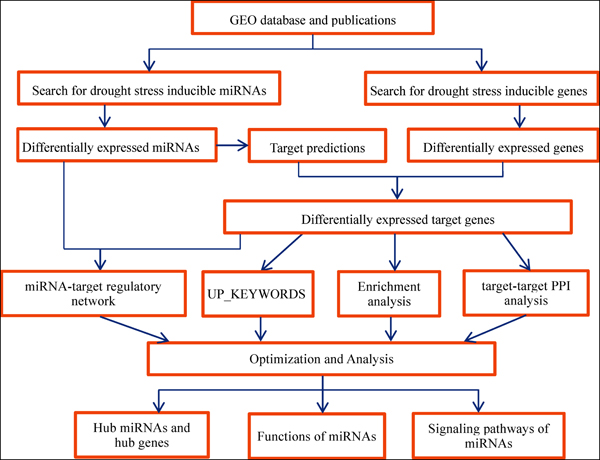