Background: Neuroimaging is an important tool in early detection of Alzheimer’s disease (AD), which is a serious neurodegenerative brain disease among the elderly subjects. Independent component analysis (ICA) is arguably one of the most widely used algorithm for the analysis of brain imaging data, which can be used to extract intrinsic networks of brain from functional magnetic resonance imaging (fMRI).

Results: (1) By separately employing ICA for sMRI and fMRI, the features extracted from fMRI improve classification accuracy by 7.5% for CN and EMCI; (2) instead of applying ICA to fMRI, using RBM further improves classification accuracy by 7.75% for CN and EMCI; (3) the lesions at the early stage of AD are more likely to occur in the regions around slices 4, 6, 10, 14, 19, 51 and 59 of the whole brain in the longitudinal direction.

Conclusion: By using fMRI instead of sMRI and RBM instead of ICA, we can classify CN and EMCI more efficiently. 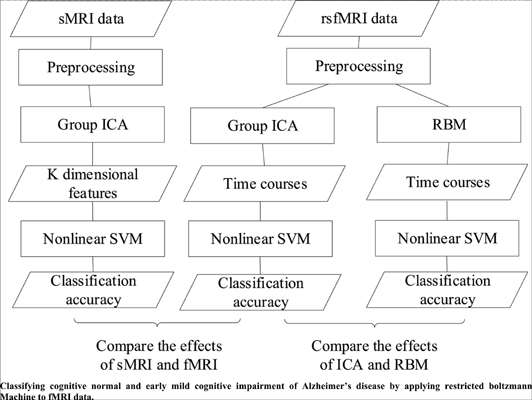