Background: Osteosarcoma (OS) is one of the most common primary malignant bone tumors in children and adolescents. OS metastasis has been a challenge in the treatment of OS. The present study screened progression related genes in OS by analyzing a public dataset GSE42352, and identified 691 up-regulated and 945 down-regulated genes in advanced stage OS compared to early-stage OS samples.

Methods: Protein-protein interaction (PPI) networks were further employed to reveal the interaction among these genes. Bioinformatics analysis showed that progression related differently expressed genes (DEGs) were significantly associated with the regulation of cell proliferation and metabolisms.

Conclusion: These findings provided novel information for us to understand the mechanisms underlying the progression and metastasis of OS. 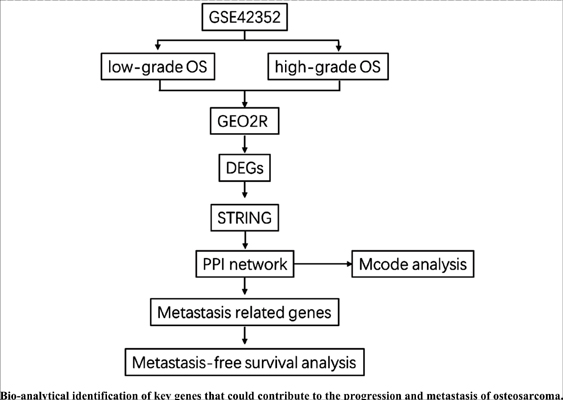